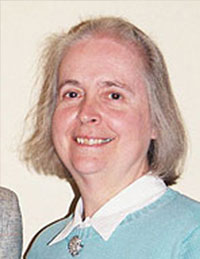 Cynthia is the Past President of Bradford Lodge and a National Lecturer for the Theosophical Society in England.  Along with her husband Atma, she is the Secretary and National Coordinator for the Theosophical Order of Service.  They now live in Teddington near their daughter’s family.  She is a delighted grandmother of four-year old twins, Finn and Maya.  Cynthia has varied interests and pastimes, which include yoga, singing, reading, gardening and tackling the Radio Times cryptic crossword.  Cynthia had been a member of the Bradford Festival Choral Society for over 50 years.

‘The Green Man.’
The Green Man is often perceived as an archetype of our oneness with Nature and can be seen in carvings in churches and other buildings throughout Europe and the rest of the world. He is epitomised by his foliate head. This illustrated PowerPoint talk takes a look at some possible interpretations of the Green Man, which includes similar figures from other cultures, and suggests some possible esoteric interpretations.

‘Mythology’ – Eternal Guideposts for Mankind.
Throughout human evolution myths have been used to help people understand and cope with what is happening to them. Myths also take us beyond the everyday material concerns. This talk uses Norse mythology to illustrate basic philosophical concepts such as duality and will outline how myths can help us on the journey of unfoldment. A PowerPoint Talk.

”Meditation: Entering the Silence’.
This is a talk aimed at those who just never get round to practising meditation. It looks at what various, mainly Theosophical writers have to say about preparation and practice.

‘The Power of Sound: the Vibrancy of Silence.’
This illustrated talk looks at sound as the basis of all manifestation. Primordial sound reverberates throughout all existence. All things in the universe are connected to each other, through vibrations, on all planes of existence. The talk will discuss different ways in which sound and silence affect our lives and how they can help us experience the Soundless Silence; this will include a look at the Seven Sounds in H. P. Blavatsky’s ‘The Voice of the Silence

‘From the Unreal to the Real’
Some speakers glibly tell us that everything around us is unreal, false, all an illusion. This talk will discuss what they might mean by that. The world around us seems very real, so we must be blissfully unaware of the illusion. What can we know of an eternal Reality, as opposed to the temporal, fleeting nature of the phenomenal world? How can we begin to lift the veils of illusion so that we can pass from the unreal to the Real?

‘Spirals as an Image of Unfolding Consciousness’
In every culture the spiral has been seen as the natural form of growth, from molecular structures to galaxies, from shells to the growth of the human soul.

‘Timeless Moments: Glimpses of the Divine’
A Timeless Moment is a moment of epiphany then, for a slice in time, we gasp in wonder at the immensity and power of the Divine. This talk will look at the common characteristics and different interpretations; also who might experience a glimpse into the Divine, and how we should prepare to attract what, after all, may be a life-changing happening.

‘Once Upon a Time: the Hidden Wisdom of Fairy Tales.’
Fairy tales reveal universal truths disguised in symbolic language. They are archetypal accounts of how we can meet and overcome obstacles in our life. Whereas mythology is often about named heroes with ideal personalities, the folk in fairy tales could be any one of us. Could there be significance in the traditional characters and numerology?

‘Mantras in Spiritual Practice’
“The speech of men cannot reach the Lords. They must be addressed in their own language. It is composed of sounds, not words. This language or the incantation of mantras being the most effective agent and the first of the keys which opens the door of communication between Mortals and Immortals.” – H P Blavatsky.

‘Angels affect us oft . . .’
The angelic kingdom is a vast hierarchy, from the subtlest of elemental essence to the blazing glory of the Seraphim. Little do we realise how much we rely on the work of these angels; they do indeed ‘affect us oft.’

‘Paving Destiny’s Path’
Creating your own future through meditation, intent and an awareness of synchronicities.

‘The Techniques of a Spiritual Life’
The eminent Theosophist, Clara Codd in her booklet of this title looks at the various stages of a life of an aspirant on the Spiritual Path; the joys, the hard work involved and the possible pitfalls. This talk will convey to the audience the main points in the work.

‘Synchronicity: Unlocking Inner Potential’
We have all experienced events that might be considered amazing or uncanny. We can choose to dismiss it as a random occurrence in a chaotic world, or we can recognise it for the potentially life-altering event it may prove to be. The “little voice” deep inside, or that gut-feeling, are forms of communication that usually turn out to be well worth heeding. If we pay attention to life’s coincidences and learn to hear their messages more clearly, we can come to influence those forces and create our own set of coincidences.

‘Being A Theosophist On Principle’
A look at some fundamental principles, and how they can help us to live life as Theosophists.

‘Who Do You Think You Are?
This talk casts light on the self and shows that it is not what the majority of people assume it to be. The search for self takes us on a journey right to the source of the septenary nature of man, to behold life in its infinite glory without the false sense of self getting in the way.

‘The Heart of the Matter’
This PowerPoint talk looks at the way in which various systems, texts, philosophies etc. use the image of the heart. Is there a common thread that runs throughout; what can we learn about ourselves and the way towards greater wisdom and service?

‘Hexagrams & Interlaced Triangles’
A PowerPoint presentation looking at some of their symbolism.

‘Keys to the Kingdoms’
A celebration of the Mineral, Plant and Animal Kingdoms with which we share the One Life. Each Kingdom is conscious at its own level and develops certain attributes throughout its evolution. This talk looks at the progress of each Kingdom and at its potential qualities. Each successive Kingdom to some extent overlaps and is dependent on the others. None can live in isolation, including we humans. PowerPoint.

‘ ‘Remember that you are theosophists’
Surely this request is as relevant today as when the Master K.H. made it? This talk looks at what has been written by and about the Masters in respect to any possible guidance – or contact with them. It seems it requires hard work!

‘The Spiral Path and the Rock Face’.
This talk discusses the two paths, sometimes called the mystic and the occult, that may be taken in the search for truth.