During August every year, the Foundation holds a six day Summer School and knowledgeable theosophical speakers provide a great variety of inspiring talks and workshops.

It takes a year of planning and dedicated work by the organising team and speakers to produce an exciting and stimulating Summer School programme, and the lecturers, study leaders, workshop leaders and therapists make the week very memorable and enjoyable.

There is a different theme each year and the school takes place at different venues around the country. The School is very welcoming and there is always something for everyone: yoga, meditation, lectures, study groups, workshops, and many interesting practical sessions after lunch.

The School caters for beginners and seasoned students and participants look forward to the next year’s school with anticipation. 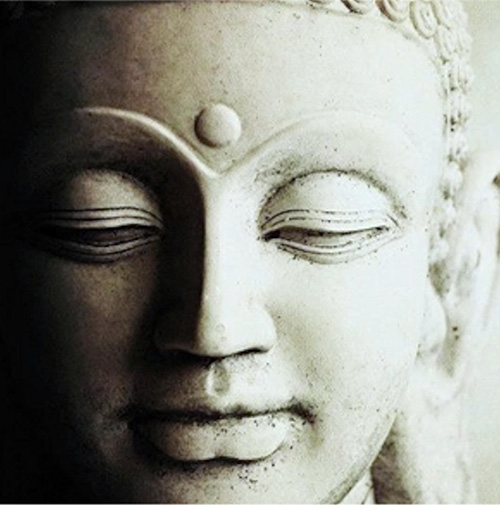 For this year`s Summer School, we returned to the popular venue of Hillscourt, the HQ and Conference Centre of the NASUWT, at Rednal, South West Birmingham.

The School ran from 10 -17th August and was titled 'Reality, Illusion and Life'.

The chief guest speaker who gave the prestigious Blavatsky Lecture as well as the Public lecture was Eric McGough, former National President and founder of both the Diploma in Theosophy course as well as the new Higher Diploma course.

The programme followed that of previous years with lectures, Study Groups, Workshops, Yoga, Qigong and Meditations.

Hillscourt is set in the lovely Lickey Hills and weather permitting, there will be two chances to go on led walks through the beautiful woods that surround the immediate area. The Wednesday afternoon outing was a Canal boat trip starting at Gas Street Basin in the vibrant centre of Birmingham.

Hillscourt has excellent en suite accommodation and serves wholesome Vegetarian and Vegan food. The number of rooms are limited and so early booking is recommended at this particular venue.

The theme for this year’s Summer School was ‘Pillars of Wisdom’ which was held at the impressive venue of Wills Hall in Bristol with its grand Old Court and stunning gardens. I was eager and excited about embarking upon this adventure for the programme had much to offer which I felt would quench my thirst for deeper understanding and insight. Upon my arrival I instantly felt the warmth and welcome from Jenny and the team and it was upon these foundations that I embarked upon a week full of lectures, study groups, workshops and yoga/chi kung for us early birds. Morning meditations ensured our days began in an atmosphere of loving harmony and Damon’s tasteful choice of classical music complemented the atmosphere in a dignified, beautiful way. 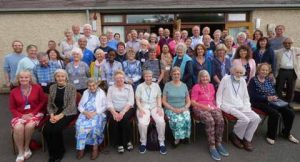 All the lectures were greatly inspiring, but those that left me particularly impressed were Scott Olsen’s ‘Divine proportions’, Jenny’s prestigious ‘Blavatsky Lecture on the Real Meaning of Brotherhood’, Petra Meyer’s detailed ‘Eastern mysticism and Modern Science’, and Pam Evan’s inspiring ‘Inner Wisdom’, to name but a few.

But which study group would I choose ? There were two sets of four, one running from Sunday to Tuesday and the other from Wednesday to Friday, but with so much on offer the choice was not an easy one. We had ‘Building the Temple of Light’, ‘Theosophy in Action’,’ Voice of the Silence’, ‘ The Mahatma Letters’, ‘Bhagavad Gita’, ‘Divine Proportions’ and ‘The Seven Rays’.

For the first half of the week I chose guest speaker Scott’s ‘Divine Proportion’ which was packed with fascinating information about our relationship with the Logos through the Golden Ratio. For the second part of the week I chose to attend the study course on the beautiful ‘Bhagavad Gita’. With such wise guidance from Atma and Bhupendra to help us understand the Scriptures in more detail I was so glad I made this choice.
But it was other things too which also made the week memorable! Who can forget the challenge of swinging our legs over the benches at mealtimes, or the colourful couple from Belgium with Greta’s infectious laughter reverberating round the grand Hogwarts dining hall ? And the kind, helpful staff who served us such plentiful and delicious vegetarian and vegan meals ? We also had endless supplies of tea and coffee along with those temptingly tasty oat biscuits.

As the week rolled by we innevitably became captivated by the rhythm and momentum of Summer School with its relaxed atmosphere in which warm friendships blossomed under the ambient August sunshine. In our quest for greater understanding it is special times like this when we are able to put aside our daily lives, share our insights with each other and bathe our souls in pure delight.

The Pillars of Wisdom event at Wills Hall (Bristol University) was my first opportunity to attend a Theosophical Society (TS) summer school. Coming down from Edinburgh, together with three other TS Edinburgh colleagues, anticipation built quickly. Our arrival at Wills Hall, an historic building set around an impressive quadrangle, did not disappoint and our reception was equally welcoming. After new introductions were affected and Jenny Baker’s opening words digested, the tough decision regarding which of many appealing study groups and workshops to select ensued. I opted for the eclectic mix of Bhagavad Gita teachings, an introduction to Sanskrit, public speaking training and a touch of Shakespeare. Being faint hearted, I decided to pass on the rigor of Mike Hall’s early morning Yoga sessions!

The school programme was both comprehensive and exhilarating. Each day began with a short meditation, followed by a lecture and then a study group session. Excellent morning lectures were delivered on various aspects of soul wisdom and love, and the interplay between mysticism and science. Scott Olsen presented, in my case, his second papers on divine proportion and sacred geometry which I felt I was now beginning to understand. Our group discussions around the Bhagavad Gita and the Yogas of Wisdom, Action and devotion, led passionately by Atma Trasi and Bhupendra Vora, were fascinating and left me wanting to know more. Our afternoons encompassed workshops and further lectures. Elizabeth Crofts opened my eyes to a new way of looking at Shakespeare while Pamela El-Hosaini helped me understand why I am sometimes on edge when delivering presentations and offered some good tips on how to address this. Afternoon talks included Jenny Baker’s inspiring Blavatsky Lecture on
Brotherhood and Susan Bayliss’s lecture on the Seven Stringed Lyre, the latter having so much relevant content for me that I will need to get the related DVD to digest it all.
Interspersed with all the TS knowledge so generously shared was a trip to Bristol harbour to see Isambard Brunel’s old steamer SS Great Britain, a visit to the TS Bristol branch, a presentation of film clips with Theosophical themes and two enchanting musical presentations. Each evening finished with a lovely meditation before then retiring for the night, tired but happy.
In conclusion, the 2018 summer school arranged by TS England was superb. I learnt so much and am now inspired to learn still more about Theosophy. I met many wonderful people and felt the beginnings of a number of future friendships were forged. I definitely plan to attend more TS schools and strongly recommend that others do so too. 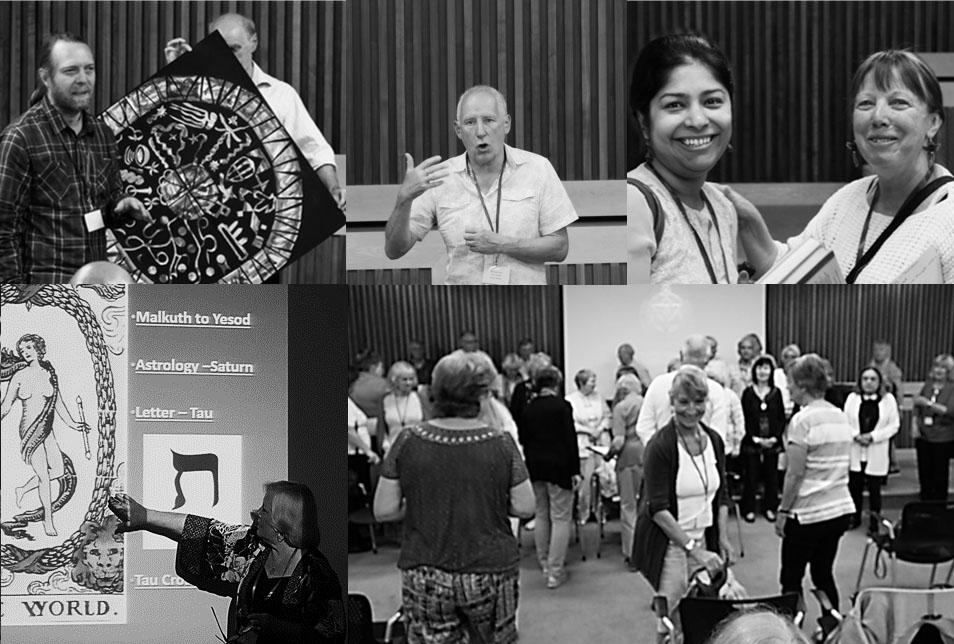 The theme of this year’s summer school was ‘Many Paths, One Goal’ and true to this All-Embracing, Universal Gnosis, I had the good fortune of attending the same in Rednall, Birmingham. As a fourth time visitor to the United Kingdom in the last decade, this year I visited England with a special intent for it to be a Heritage Summer! Through the quaint bookstore Watkins and then down the road from Baker Street I found my Indian love for Theosophy at 50 Gloucester Place. Many Paths, One Goal has been my very sumptuous, soul reviving one week residence – an inner Adyar! (Adyar – T.S. International Headquarters which I visited in 2007).

To begin to write a review of something as special as a diverse group of people from different parts of a country and even the world, congregating and immersing in communion (of sorts), one can only begin with delight right at the first step. The published programme of lectures, workshops and study groups was like the quintessential Golden Gates, clear enough for a fresh entrant to begin study and perceptibly high and far-reaching to know that one is entering…. a place, a realm, a time-space and in reality ‘Knowledge.’ To speak more practically though, and of course by way of a compliment, it caused me a few moments of heartache to try and choose which option to take in each category! Delight is not easy, especially if it is going to consume you – full and plenty! read more... 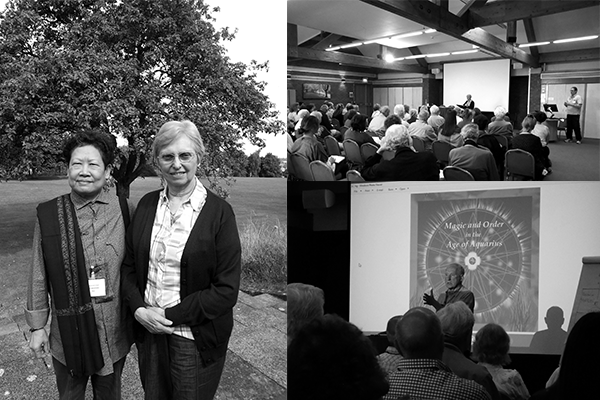 When I received the leaflets and the letter outlining directions to the venue, I began to feel a heightened excitement about the quickly approaching Summer School at Bristol University on 6th August.

I checked out the Wills Hall residential site on google and what a distance it appeared that I had to cover by rail from Durham. The travel, however, was the only hardship I experienced during a fantastic week. On leaving the train at Temple Meads, I bumped into a fellow student who became my constant companion throughout the week and shared a taxi to Wills Hall.

We checked in at the registration office and after receiving our keys and directions made our way to our rooms. I had a very clean and decent room ensuite and it was very close to the Conference Hall where most of the lectures took place.

At 6pm we had our first evening meal and it was at this point that I met someone else who for the rest of the week I accompanied to Yoga each morning. I found the meals to be of very good quality and a decent variety of choice and the staff were very attentive too. The Grand Dining Hall with a high ceiling, exquisite wood panelled walls and beautiful chandeliers was reminiscent of a scene from a Harry Potter movie. Click here to read more…. 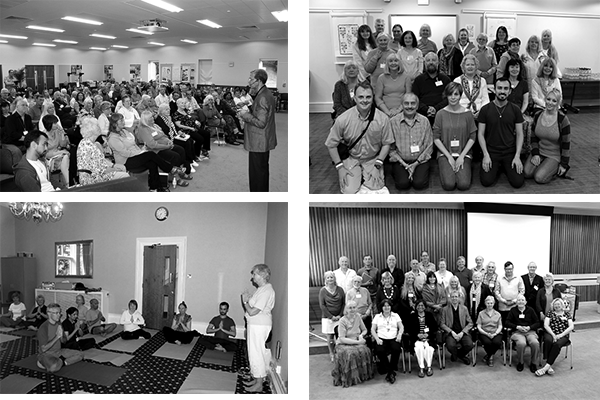 The title of the School was “The Relevance of Theosophy: Spirituality in Daily Living” and the talks included “Soul, Personality and the Rainbow Bridge”, “Living in the Presence of the Soul”, Being a Theosophist in Principle”, “Embracing the Dragon of Wisdom” and “ Living the Mystical Heart of Theosophy”. We also held eight three day Study Courses with titles such as “The Essential Tools of Practical Theosophy”, “Theosophy for Beginners “, “ The Secret Doctrine” and “ Meditation”. the School was held from July 31st to August 6th at Hillscourt, the conference Centre of the NASUWT, at Rednall.

The School, which is open to both members and non-members of the Theosophical Society, attracts people from all over the world. This year we had delegates from Wales, Scotland, Brazil and New Zealand. Read more…