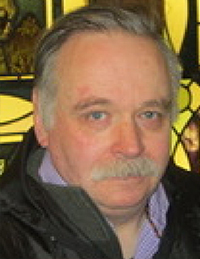 This in a general introduction to the Path of the Tarot. Dealing with historical origins, of the Tarot and the rival French and English schools of understanding of Tarot.

It includes the prominent role of several members of the London Theosophical society in the development of the modern esoteric Tarot, and the reasons why HP Blavatsky scarcely mentions the topic of Tarot in her writings. It includes a basic numerological introduction to Tarot for beginners. (powerpoint presentation).

What does Theosophy have to say on the Topic of God? How does the teaching on this subject in the Mahatma Letters and the writings of HP Blavatsky, and others in the Theosophical movement differ from ideas in the other world religions and philosophers? How do Theosophical insights benefit our knowledge in the 21st Century? (powerpoint presentation).

(This talk has already been given in London.)

An audio exploration of the use of Mantra in the Hindu, Jewish, Christian, Buddhist and other traditions. As well as defining what mantras are it shows the almost universal form of this devotional form. We get the feel of a common spiritual uplift, from many sources. There is also some discussion of the impact of mantra on brainwaves and the chakra system.

The above talk can also be given in more of a workshop format, with more emphasis on the impact of sound as a tool in meditation, with opportunities to experience different brain wave patterns, as created by the practice of using Mantra. It gives more time to the experiences gained with selected Mantras, than the overview in the Talk.

The Meaning of Seven

Why do Theosophists ‘do everything in sevens?’ A partial study of our sevenfold understanding of the human psyche, and the huge number of ways sevens occur in Science, Mythology, Biology and other places.

(This talk has been given in London)

The Kabbalah -Does God do Crosswords?-

An illustrated talk covering both the Hebrew and Hermetic views of Kabbalah. The subject forms a key part of the teachings within the Secret Doctrine, but Western Esotericism is often overlooked within modern Theosophy. This gives a brief overview of some of the main ideas in this vast subject and how they relate to Theosophy. (powerpoint presentation).

(This was given as a seminar at Summer school)

What do we understand by Initiation? It is an idea that may have gone out of favour today, but played a vital role in the ancient world. There are traces of it all over the world. 3 fold and 7 fold initiations, in the Christian Church. Initiation in the Bible and in Hinduism, Tibet and early Theosophy. (powerpoint presentation).

Threads from a Theosophical Cloth.

What are some of the main sources and influences in Theosophy? A look at the tends and developments within the earlier part of Theosophy from the foundation of the Society in 1875, up to the death of Alice A. Bailey in 1949. Including the 3 founders, Krishnamurti, Annie Besant, Alice A. Bailey and others. An opportunity to put some powerful personalities in perspective of their times. It is a personal view which was written to clarify, the who was who, and who did what, kinds of questions, which came up while studying general Theosophy in the Lodge study group. (powerpoint presentation).